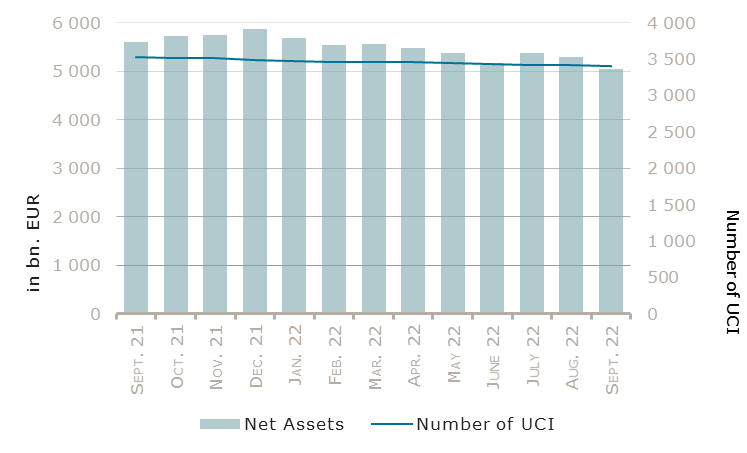 The number of undertakings for collective investment (UCIs) taken into consideration totalled 3,403, against 3,413 the previous month. A total of 2,221 entities adopted an umbrella structure representing 13,186 sub-funds. Adding the 1,182 entities with a traditional UCI structure to that figure, a total of 14,368 fund units were active in the financial centre.

As regards the impact of financial markets on the main categories of undertakings for collective investment and the net capital investment in these UCIs, the following can be said for the month of September.

September saw a decline of all UCI equity categories in a context marked by the Ukraine crisis, high inflation and the rise of interest rates by major Central banks as well as a globally deteriorated economic climate. Credit spreads and bond yields continued to rise.

Concerning developed markets, the European equity UCI category registered a negative performance amid a deterioration of most indicators in the face of the energy crisis, a dropdown in consumer confidence, higher inflation and a rise of interest rates by the European Central Bank (ECB). The US equity UCI category declined as well in a context marked by monetary policy tightening, high inflation figures and a strong dollar, despite an overall economic outlook remaining more positive in the US and better economic indicators. The Japanese equity UCI category followed the downward trend in equity markets on the back of higher inflation, rising interest rates and the tensions between China and Taiwan.

As for emerging countries, the Asian equity category saw a sharp sell-off in consequence of the ongoing strict zero-COVID policy and the slowdown in the property market in China as well as the decline in global trade. The Eastern European equity UCI category experienced a fall as the region continued to suffer from the contagion of the Ukraine crisis and the consequences of the energy crisis. While some Latin American countries saw growth and inflation improving, the Latin American equity UCI category globally followed the downward trend and ended the month in negative territory.

Development of equity UCIs during the month of September 2022*

On both sides of the Atlantic, high inflation rates induced interest rate hikes by Central Banks, despite recession fears. The ECB decided unanimously to increase its three key interest rates by 75bps, while the US Federal Reserve (Fed) decided in September a third consecutive 75 bps hike, bringing the Fed Funds rate to 3.25%. Against this backdrop, long term interest rates and credit spreads were rising across all bond categories, pushing the EUR and USD UCI categories in negative territory despite the strong appreciation of the USD.

The Emerging Market bond UCI category fell in September as well, largely due to the stronger USD and higher US interest rates as well as to the weaker global growth.

Development of fixed income UCIs during the month of September 2022* 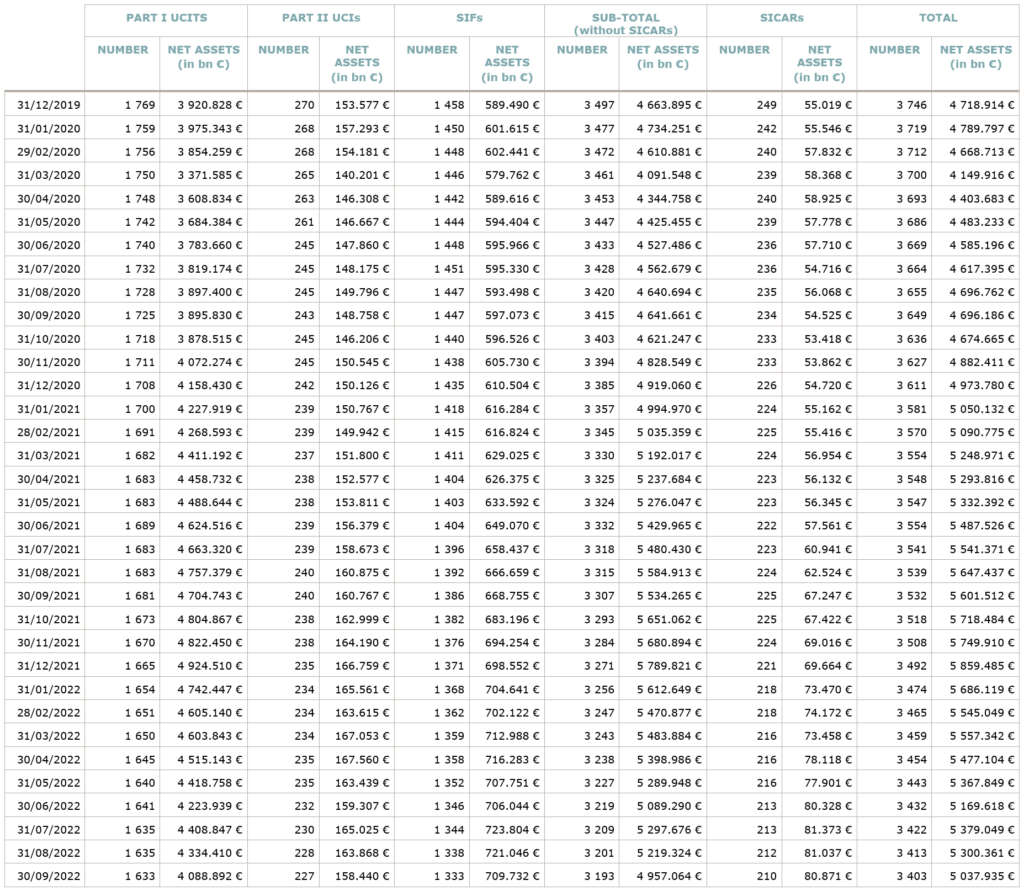