The Luxembourg UCI industry thus registered a positive variation amounting to EUR 26.847 billion in October. This increase represents the sum of negative net capital investments of EUR 12.501 billion (-0.25%) and of the positive development of financial markets amounting to EUR 39.348 billion (+0.78%). 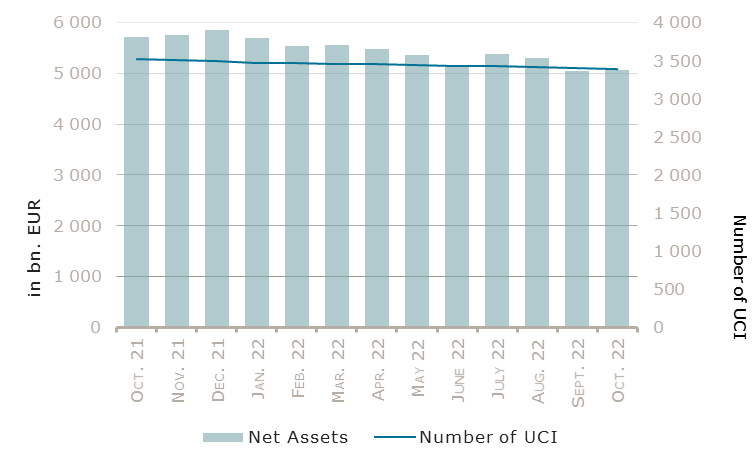 The number of undertakings for collective investment (UCIs) taken into consideration totalled 3,392, against 3,403 the previous month. A total of 2,212 entities adopted an umbrella structure representing 13,163 sub-funds. Adding the 1,180 entities with a traditional UCI structure to that figure, a total of 14,343 fund units were active in the financial centre.

As regards the impact of financial markets on the main categories of undertakings for collective investment and the net capital investment in these UCIs, the following can be said for the month of October.

Concerning developed markets, the European equity UCI category registered a positive performance, supported by measures taken by European governments to dampen the impact of the energy crisis and by more dovish European Central Bank (ECB) statements induced by a deteriorating economic outlook. Concerning the US equity UCI category, despite activity indicators also worsened in the United States and inflation stayed at a high level, the US equity category also realised a positive performance in October. The Japanese equity UCI category, facing a stronger internal demand, having a lower inflation than most other developed markets and being supported by an accommodative monetary policy, finished the month in positive territory.

As for emerging countries, the Asian equity category realised an overall negative performance in a context marked by the ongoing strict zero-COVID policy in China, the atony of its property market and by the reappointment of the president Xi, while South Korea, the Philippines and India recorded gains. The Eastern European equity UCI category realised a positive performance as the region followed the upward trend of the European equity markets. The Latin American equity UCI category was the best performing UCI category in October due to lower inflation expectation and more positive growth outlook.

Development of equity UCIs during the month of October 2022*

Given the level of inflation, close to 10%, the ECB decided to raise again its policy interest rates by 75bps. While the rise was anticipated by the market and the ECB communication perceived as more dovish, the yields rose only marginally and credit spread narrowed. Overall the EUR denominated bond UCI category realised a positive performance in October.

The situation was relatively similar for the US denominated bond UCI category, with a slight rise of the yields and a narrowing of credit spreads. The deterioration of the economic outlook and the slowdown of the real estate market were perceived as correlates of a potentially less hawkish attitude of the Federal Reserve Bank (Fed). Despite the good performance of the high yield bonds segment, the US denominated bond UCI category recorded a loss, partially driven by the depreciation of the USD against the EUR.

The Emerging Market bond UCI category declined in October, due to the tightening of financial conditions in a rising rate environment and to the weaker global growth.

Development of fixed income UCIs during the month of October 2022*

The development of net assets of diversified Luxembourg UCIs and funds of funds is illustrated in the table below. 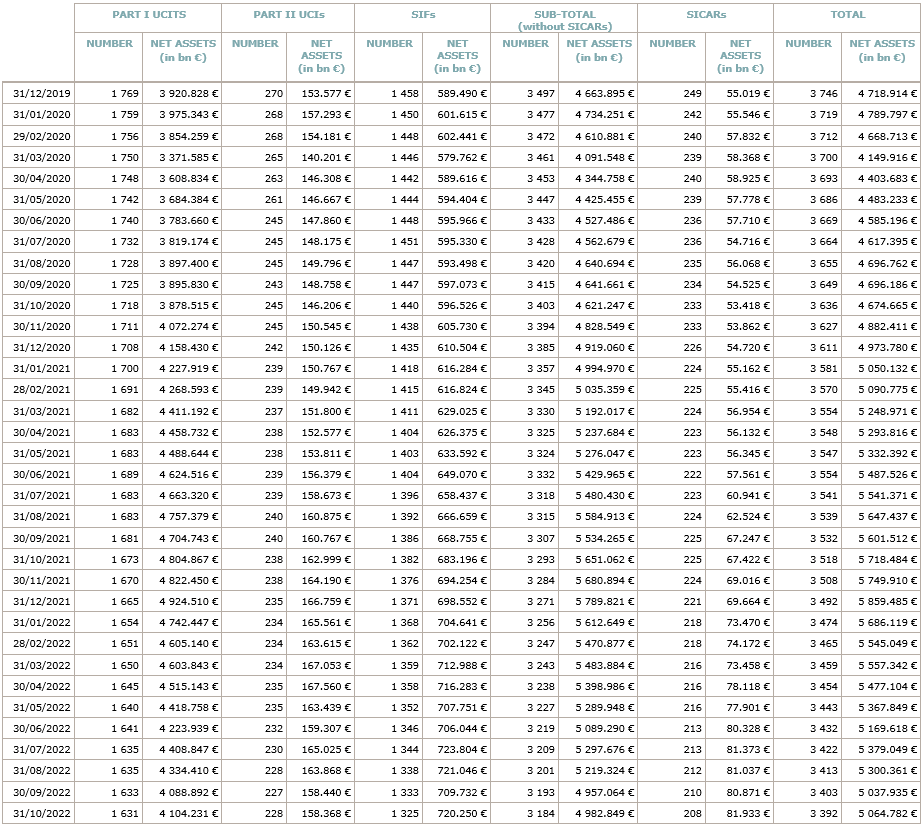 During the month under review, the following seven undertakings for collective investment have been registered on the official list: